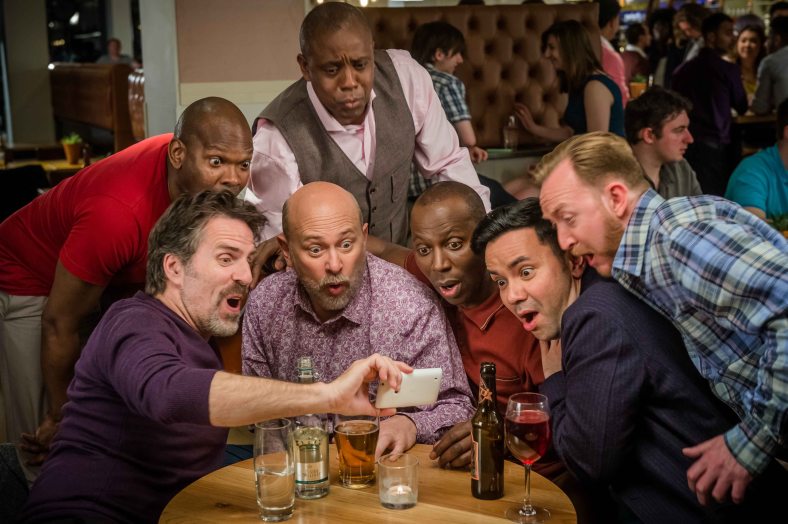 The summer of 2014 was one that saw me at my busiest. It started in April when I had turned down the opportunity to do a season of amazing plays at Keswick and a further recall for another amazing season at Pitlochry. I was having to choose between them and making my own work in London. It was precarious. I was with a new agent and my 6 month trial period was coming to its end. An audition for a small role in a new series by Russell T Davies came up and immediately my body became electric. It had to be this one which kept me on their books.

Reading the scenes and loving them. I knew this person. I didn’t know how to play ‘Max’ but I knew that there was a wide scope of what I could do with him. Meeting the director David Evans at Casting Director Andy Pryor’s office was really assuring. They were all approachable, friendly, laughing. I remember Matt Strevens sitting and giggling at my audition, while I hopefully, made intelligent, instinctual choices about ‘the campest of the group’. I leave feeling open and uplifted. In the corridor wasn’t the usual throng of Asian actors that I usually get seen with but a small ginger man. Strange. Maybe they were only seeing a few people at a time, I think. I don’t think about it, or mention it for the rest of the week. So often have I jinxed myself. Until the Friday when my phone rang. The agent. My heart did that really big beat then stops when I get told that I got the role. I’m happy and almost in tears. Angie, the main receptionist at the temp job is almost crying too!

Fast forward to a few weeks later, a train to Manchester for the read through. I spy a handsome young man who is sat diagonally opposite who is looking to charge his phone. ‘I bet he’s an actor. I wonder if he’s going to the reading. ‘He’d make a good Scott’ (‘Scott’ is the eye candy in the bar scene we get introduced in, later gets changed to ‘Louis’ in the script possibly because of a Banana episode with a character called Scott). Just outside Manchester the train doesn’t go any further due to a lorry hitting a bridge up ahead. Panicked, I call the coordinator and he says to get a cab. The good-looking guy makes the same call! (not that I’m droppping eaves) …We talk and it turns out he IS in Cucumber and he IS playing Scott. I find Andy Pryor and his assistants who are on the same train and we all get cabs.

The read-through was packed.  Long room in Media City full of directors, assistant directors, designers, wardrobe, make-up, sound, everyone especially actors, actors and more actors. A familiar face. Surian Fletcher-Jones who directed me in 1999 at the Tricycle in Kilburn is there. She’s part of Commissioning at Channel 4. How strange to have met her on the tube 5 years ago when I found this out to this day where we can wonder at the strange paths our lives have taken. A friendly face! Yayy!

Russell (as we get to call him, as is his name) is there. So funny and humble. I haven’t been to a tv read-through where the writer reads out his stage directions. This is a great lesson in the care, precision and passion an artist takes in their work. He’s sharing it with us and his passion is infectious.

Some weeks later and another train up to do the rehearsals of the 2 scenes that we are in. I get to meet Vincent Franklin (Henry), Darren Lawrence (playing Raymond, who turns out to be the small ginger man in the waiting room), Andy Burke (Steve) Christian Dixon (Steve’s Boyfriend), Con O’Neill (Cliff) and Cyril Nri (Lance) and of of course Jack Derges (Louis). I do have a funny story about how I found out that Con was playing Cliff. Remind me later. I was at the hotel when I knew. I had a lot of fun at the hotel. Usually by myself and a camera.

David Evans is gentle, he has an idea of how the scene should play and how it’s to be shot. Working with the boys is funny. We’re meant to be long-term friends. I connect with Darren and that grows. Over the weeks Darren Lawrence becomes quite the good friend on and off set. A good talker and a good ear and also very very funny. We film a week later and we shoot the taxi scene first in that out-of-sequence way that tv is always shot. A discount clothing store in the middle of town gets transformed into a taxi waiting room. I’m amazed at the big budget of Cucumber. It’s like being on a film, with just as much care and attention. This might spoil me.

A week later we film the first scene. We’ve gotten to know each other better after nights out, nights in, and a lot of banter. Then the joining scene gets filmed last a few weeks later. Fun in the rain. Another part of Manchester gets used for our little tv show. Looking at it, I do think that this is the pinnacle of British television

I was a bit sad to leave filming Episode 1 but it looked hopeful at the time that I would appear later due to events in the story. It doesn’t turn out that way but the story doesn’t end there. Find out in Part 2 in 7 weeks time.

(The next part is more about meeting Freddie Fox, Andrew Hayden Smith, Dino Fetscher and a guy called Meatballs who you will get to know and love, played by Mike Coombes.)

Con, Vinc, Cyril, Me and Darren in Cucumber