I’d won a commission to paint a canvas for a music video after an artist friend of mine put it out on Facebook that he was looking for a person who did live painting for a music video. I sent him a quick message with my links and details and got one straight back with a ‘You’d be perfect! I’ll pass the director your details’.  Thinking that I’d be shortlisted and have to pitch my experience with my Skylarking practice, I waited. Instead I got the call.

A chat with Steve Glashier (who started following me on Instagram the day before, I checked him out – he’d done music video shoots, one for Chrissie Hynde. I got a little excited when I saw this.) revealed that it was indeed a video for her and that I was offered the commission. I was such a fan of her music with The Pretenders, I said yes! I bought the track off the internet and listened to it for inspiration. And I loved the writing. I was hooked when I heard this line:

“I need blood and breath to mix my colours”

Fast forward to a week later, having organised a 6ft x 8ft canvas and stretcher I was luckily able to hire an assistant for the day (basically, pay my actor and artist friend Sioned Jones to be there to advise and help out as she was used to stretching her own canvases and had all the tools to do so. I’m thankful for her expertise!) I knew having a friend who could intuit what I was doing, could predict when I needed a teabreak, had done life-modelling, was a good laugh and knew when I needed getting out of my head and back into the room. When I Skylark, I do get lost in the clouds. The day before the shoot, the canvas arrives and I was unable to get it up my stairwell!  Sioned arrives promptly at 9am on the shoot day and after much frame wrangling, we unpick the staples, roll the canvas, dismantle the frame, get it all upstairs and re-assemble it in the living room, having cleared it of furniture. Yes, Sioned makes sense. 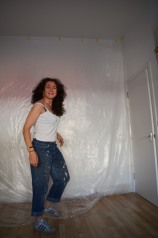 We’d also initially covered the walls in plastic lining which was quite fun. Then the producer arrived to set up lighting and cameras. Then the director Steve Glashier. Then the DoP Paul Mackay. It was all getting close to the starting line.

Having done a time lapse painting video for Unbroken Line, my solo stage show, I knew that there was potential for an element of animation in the reveal of the painting. I wanted to know how many shots they were going to use per second of film, how many shots we’d taken, in order that the story got revealed at the right point in the song. I also knew that because I only had one canvas, this was going to be done in one long single take. No pressure then.

I’d worked out what I wanted to do and what needed to happen having listened to the track several times over the week and tried to understand the emotional journey of Chrissie’s writing in this song. The director, Steven Glashier, in the week leading up to the shoot, let me have artistic freedom with what I was going to paint as long as the blue was the last thing that went on. The song, a story of a short love affair with an artist who suddenly goes, disappears from the scene, the repeated description of his hands and fingers and the mysterious title ‘Adding The Blue’ which isn’t a line in the song. I knew what it had to be about and I had an image in my head that was haunting me.

In a richly coloured, yet seemingly desolate landscape, stands a lone figure of a nude man, whose expression is rather forlorn and whose pose is somewhat curious. Once he is complete, the sky brightens and then the landscape lifts, trees reveal.

It’s only then that blue is added. From the formless midnight blue shadow that seems to be pressing into him, layers of mid blue, then baby blue reveal a woman, also nude, touching his forearm, making sense of his pose, and is revealed to be holding her close to him.

My early sketch shows that he was in fact, in blue and she was the red figure. But I knew that wouldn’t make sense to the relationship that I wanted to show in the video. Because of the changes, Sioned was on hand to subtly stand in pose of the figures so I could paint from life. He has to be the lone figure. It’s only after we’ve added the blue figure of the woman in this love embrace that the story of the picture makes sense. He’s the missing element in the song and she’s the missing element in the painting. She sings to him because he’s there. He hugs her because she’s revealed. She completes him, but he also completes her. Yes, very Joni Mitchell. I couldn’t help myself.

Have a look and listen. I hope you like it. Thank you Chrissie Hynde for writing a great song